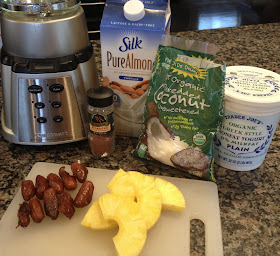 Add to blender and pulse. The dates can get stuck in the blade, so you may want to blend those vigorously first before adding the other ingredients. I’ve also read that if you soak the dates in water for a while before blending, it helps avoid the chunks. I may try that next time.

Does it work? Well, I’m still typing this as I drink it, so I can’t guarantee an immediate kickstart. But, here’s the actual research that gives me some hope:

So the “research” is a bit shaky, as with everything else on the interweb, right? But, I feel good about the mix of ingredients not doing any harm, which is more than I can say for some of the things I’ve read about & heard about. The ingredients are all good for me, natural, and are hopefully going to get things going down there and help to avoid a medical induction as we get further and further past the due date.